Read a Chapter From My New Series, True Crime Stories

Last month I released the first book in my new book series “True Crime Anthology” called True Crime Stories. Most of my other books are about serial killers, so I thought that I would make a new series of books that focus on other murder cases and compile a bunch of shorter stories in to one book. This was something new for me and it’s been a great success as I’ve got a lot of positive feedback from True Crime Stories Vol 1. 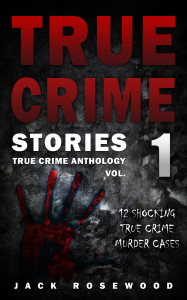 This is one of the cases from this book. If you like it, you can find the full book with the other 11 cases HERE.

The Murder of Little Anna Palmer

What type of person could kill an innocent child? This is a question that psychiatrists, psychologists, and penal experts have attempted to answer now for decades through interviews and examinations of known child killers. Unfortunately, all the studies have apparently failed to unlock the secrets to what makes a child killer tick because the murder of children keeps happening.

With that said, child murder is still a relatively rare phenomenon, and children who follow basic safety rules are usually exempt from the worst category of criminals, which makes the next case all the more frightening.

In 1998, ten-year-old Anna Palmer was like any other kid her age—she liked to spend time with her friends, pets, and family. Most importantly, Anna followed her mother’s safety rules, but none of that helped the poor little girl when she was brutally murdered on her family’s porch in broad daylight on September 10, 1998.

September 10th began just like any other in the Palmer household in Salt Lake City, Utah. At around 5 p.m., Anna called her mother Nancy at work to ask if she could play outside with some neighborhood kids. The Palmer’s neighborhood was very safe and everyone knew each other, so it was common for all the kids to meet up and ride bikes or play games like hide and seek. Fifth grader Anna was allowed to take part in the neighborhood activities as long as she told her mother where she was going and came back home at a specific time, usually before dark. Nancy told Anna that it would be fine, but that she should be home by 7 p.m. when she arrived home from work.

When Nancy came home at 7, she was surprised to see Anna lying on the front porch, but when she got closer her surprise turned to horror—little Anna was stiff and in a pool of blood. The petrified mother immediately called 911 and attempted to conduct CPR on Anna, but the poor little girl’s throat was gashed and her spinal cord was severed. Anna was dead before Nancy got home.

An autopsy revealed that Anna was beaten and stabbed five times. Either the gash to the throat or the stab to the spinal cord could have killed her. Anna was also sexually assaulted.

After the initial shock of the horrific murder wore off, the mood of the residents of Salt Lake City turned to fear and anger. If such a despicable murder could happen to a girl that seemingly followed all the safety rules and who lived in a safe neighborhood, then no child was safe. The people were also angry, and in the religiously conservative state of Utah, people had biblical retribution on their minds.

The Salt Lake City police had to move fast to catch Anna’s killer.

Homicide detectives with the Salt Lake City police department immediately went to work by canvassing Anna’s neighborhood and interviewing her friends and family. The case was as bizarre as it was heart wrenching due to the circumstances of little Anna being abducted and murdered all within a matter of minutes, near a busy intersection, and during daylight hours. Despite those facts, no one had seen her taken or murdered.

Detectives quickly put together a timeline for the last two hours of Anna Palmer’s life, which helped bring to light a suspect.

After she got off the phone with her mother, Anna walked a few houses down to meet her friend Loxane Konesavanh. The two girls went to a local park and spent most of the next two hours swinging. When it got close to 7 p.m., Anna, being the safe girl who followed her mother’s rules, began to walk back home with Loxane. The two girls then noticed that a man was following them, so remembering “stranger danger,” they let him pass and said nothing to him. Loxane said that when the man passed them, he turned and glared at Anna.

The two girls then stopped at the yard of fourteen-year-old Amie Johnson to see her new kitten. Loxane then went home a different way than Anna, but Anna was apparently accompanied by the man the two girls had seen before.

“He creeped me out personally,” said Johnson, who witnessed the mysterious man walking with Anna. “I looked back and Anna was walking home, and he was still walking behind her like a crazy person. I looked again and no one was there.”

Adult neighbors also reported seeing a young man who fit the girls’ description lurking around the area earlier in the day. Witnesses said he looked drugged or drunk, but none knew who he was. A man matching the description was also seen walking around the scene of Anna’s murder.

Did the killer return to the scene of the crime?

The lead sounded promising to investigators, but identifying the creepy stranger would prove to be extremely difficult. Detectives interviewed everyone who lived in the neighborhood and paid special attention to all known sex offenders. In total, the Salt Lake City Police Department interviewed over 200 people in connection with the murder of Anna Palmer.

Anna’s family also got involved by making public appeals via the media for anyone with any information about the little girl’s murder to come forward to the police. Further incentive was added with an $11,000 reward for information leading to the killer’s arrest and conviction, but still no one came forward. The case quickly became cold.

Although the case may have gone cold, little Anna took an important clue from the killer that ultimately led to his arrest. Despite her size, the little girl ferociously fought her attacker by scratching him, which left some of the killer’s DNA profile under her fingernails.

1998 was still early in terms of the CODIS database, but forensic experts with the Salt Lake City police dutifully collected a sample where it would be entered at a later time.

In 1998, California native Matt Breck was nineteen with no direction in his life. He originally came to Utah with his brother Tom after Tom’s friend, Todd Clark, told the two that they could find steady employment and a chance to start over in the Beehive State. Not long after they arrived in Utah, Tom found steady employment, but things did not go that way for Matt.

Clark said Breck thought of himself as a tough guy who would rather spend the day drinking than working. He also said that Breck tried to pick fights with people and liked to carry knives, which he proudly showed to anyone interested. Clark’s wife was particularly creeped out by the younger Breck and claims she told a police officer she knew to take a look at Matt when she heard about Anna’s murder. Around the time Anna was murdered, Breck was charged with a violent felony in an unrelated case, but had the charged lowered to misdemeanor and served very little time in jail.

Most importantly, no DNA was taken from Breck during his short stay in the county jail.

After he got out of jail in Utah, Breck headed north to Idaho, but instead of getting a new start, his criminal behavior got more extreme. He was convicted of a burglary charge in 1999, served two years, and was released in 2001. Not long after his release, he was picked up on a child molestation charge and given a lengthy prison sentence.

A sample of his DNA was also taken and entered into the CODIS database.

The CODIS system needs to be constantly updated, and agencies that are looking for a match from a DNA sample need to continually check the system—emails are not sent when/if a match is made.

In late 2009, detectives from Salt Lake City finally received the news they were waiting for—a match had been made in the CODIS system to the DNA recovered from under Anna’s fingernails. Authorities then went to the Idaho prison where Breck was incarcerated and questioned him about the murder of Anna Palmer. He admitted that he lived in the neighborhood at the time, but denied involvement in her murder or of even knowing the little girl. It was at that point that police knew they had their man.

Breck was then extradited to Salt Lake City and charged with first degree murder and aggravated sex abuse of a child. Utah is a death penalty state and if the death penalty was created for any one person, it would be Matthew Breck. Feeling the anger of the residents of Salt Lake City upon him, Breck took the sensible option and pled guilty to murder in 2011 in order to receive a sentence of life without parole.

Some think that Breck got off easy, but the reality is that as a high-profile child killer, his life in a maximum security prison will not be easy. Breck will be sent to one of Utah’s tougher prisons where he will probably have to spend most of his life in a protected wing where he will have few luxuries and only be allowed out of his cell for limited periods. If he decides to enter general population, if he even has that option, where he will be afforded more luxuries and freedoms, he then runs the risk of being beaten, raped, or even murdered by any number of inmates. Child killers are at the bottom of any prison hierarchy, which means that Breck will constantly have to watch his back.

Whether Breck chooses to take his chances in the prison’s general population or he checks into protective custody, he most certainly has a miserable life ahead of him.

The tragic and strange case of Anna Palmer’s murder could only have been solved through scientific advances, namely the CODIS database. As Sam Gill, the district attorney who prosecuted Breck said: “It was through science that this poor girl, who was tragically and horrifically murdered in our community, was able to basically point to her killer.”

You can find the full book HERE