This is a full chapter from one of the stories of my book True Crime Stories Vol.3.

The Disappearance and Murder of Ryan Lane

The modern world has provided all of us with some pretty amazing things that have made our lives easier. Cars and airplanes have made travel a breeze, while dishwashers, washers, and dryers have allowed us to have easier domestic lives.

And who can live without a smart-phone?

It is true that science and technology have made life in industrialized countries easier in some ways, but psychologists, psychiatrists, and sociologists have argued that our use of, and some would say dependence on, technology in our daily lives has been a major factor in the decline of interpersonal relationships.

One does not have to look very far to see some signs of this trend. Couples at restaurants out for dinner spend more time on their phones then they do talking with each other and people everywhere live in a virtual world where updating their social media sites is more important than developing relationships in the real world.

Marriage has long been considered one of the casualties of the modern age and now that we are firmly in the age of Internet, divorce rates are steadily increasing in the most industrialized nations.

Despite the now ubiquitous nature of divorce in the modern world, most people who find themselves in one eventually move on with their lives. Of course, things are more difficult when children are involved. Custody disputes can quickly turn an amicable divorce into one full of acrimony. Allegations of misconduct can be made and sometimes more than just feelings are hurt. Even so, most custody disputes end peaceably as both parents realize that years of bickering will only serve to further alienate their children and that a child needs to have a good relationship with both parents.

But in some rare cases, one of the parents involved in a custody dispute believes that he or she and the children involved will be better served if the other parent is taken out of the equation.

In February 2012, Ryan Lane was a twenty-four-year old father living in Calgary, Alberta, who was hoping to get closer to his young daughter. Life had not been particularly easy for Lane. He had trouble finding decent-paying employment and did not get along very well with the mother of his daughter, an ex-girlfriend who had fulltime custody of their child.

Despite these setbacks, Lane was young and determined to put his life on a positive path. He was working and had recently spoken with a lawyer about establishing specific times to see his daughter. His daughter’s mother, Sheena Cuthill, was protective of the child to the point of obsession and would rarely let Lane visit her. Initially, Lane was fine with the arrangement, but once he matured a little he decided he wanted to develop a relationship with his child.

Lane won a judgement in family court that allowed him visitation of his daughter. On February 6, 2012, he met with Cuthill at a local pizza restaurant to discuss the details of the visitation agreement.

All seemed well for Lane.

Then the next day Lane received a mysterious call from a stranger who asked to meet with him to discuss a custody arrangement. Lane’s family was immediately disturbed by the call and Ryan’s father Bruce warned against him going to the meeting.

“What’s he gonna do, stab me, or something?” said Ryan to Bruce.

Bruce pleaded with his son to let him come along, but Ryan insisted he go alone, as that was what the caller had stated. Ryan then walked to a nearby strip mall to meet the mysterious caller, but his father followed behind in his car despite his son’s objections.

Bruce Lane then watched as his son got into a red pickup, which then drove off.

As hours turned to days, it was clear to Ryan Lane’s family that something bad had happened to him. A missing person report was filed with the Calgary Police Department, and detectives followed up on the information about the custody dispute, the mysterious caller and the red truck. Although the situation looked suspicious to investigators and the Lane family was sure something had happened to Ryan, the Calgary police had no solid evidence that foul play was involved.

As the cold Calgary winter turned to spring and then summer, news reports of Ryan’s disappearance faded and it seemed to some that police interest in the case had also waned.

But the reality was that detectives were looking closely at Sheena Cuthill and her associates due to some tips they had received and a growing amount of physical and circumstantial evidence they had collected.

But there was still no body.

Murderers are sometimes convicted without the body of the victim ever being discovered, but prosecutors will tell you that their job is much easier if they have a body. Juries often tend to be skeptical and require plenty of evidence to convict a person of murder, especially in today’s world where both documentary and fictional television shows that profile the use of forensic evidence to solve crimes are commonplace.

In November 2012, the search for Ryan Lane finally came to an end when the charred remains of a human were discovered in a burn barrel in a remote area of northeast Calgary known as Beiseker. Although investigators believed they had found Ryan’s final resting place, the degraded nature of the body could not be identified through DNA profiling. A forensic anthropologist was able to determine that the remains were of a person between the ages of nineteen and thirty, which fit Lane’s age; but most importantly, a ring that Ryan’s family identified as belonging to him was found in the pile of ashes.

It seems the killer or killers had made their first mistake.

The location of Ryan’s remains would later prove to be a key piece of circumstantial evidence.

Once Ryan’s remains were discovered, homicide investigators were able to piece together the other evidence they had been collecting in the prior months to produce an arrest warrant for Sheen Cuthill, her husband Timothy Rempel, and his brother Wilhelm “Will” Rempel for the murder of Ryan Lane. Based on statements the defendants gave to police and Cuthill’s testimony at her murder trial, it was learned that the three plotted against Lane in order to prevent him from seeing his daughter.

According to Cuthill, the initial plan was just to intimidate and scare Lane away, but things quickly got out of hand. She claimed that the three met on the morning of February 6, 2012, at Cuthill’s grandmother’s home in northeast Calgary to discuss the details of the plan.

Cuthill’s courtroom testimony was valuable in answering who Ryan Lane met on February 7—Tim and Will Rempel—but it was short on important details. Essentially, Cuthill attempted to shift culpability in the murder from herself to the Rempel brothers.

But the mountain of evidence against all three clearly demonstrated that each was equally responsible for Ryan’s death.

When Sheena Cuthill and the Rempel brothers went to trial, they faced an uphill battle trying to refute what seemed like an endless line of evidence against them. Although much of the evidence was circumstantial, there was just so much of it that it could not possibly be explained away and the few bits of forensic evidence the prosecutors did have only served to corroborate the circumstantial evidence.

One of the most damning pieces of physical evidence in the case was the discovery of Ryan Lane’s DNA in both Will Rempel’s truck, which happened to be red like the one Ryan was seen getting into, and Tim Rempel’s jeep. The presence of the DNA could be explained away by a good defense lawyer perhaps, but it did not look good for the two brothers when it was revealed that they were caught on camera cleaning both vehicles inside and out the day of Ryan’s disappearance. It was also extremely suspicious that Will sold his truck, which was in good condition, to a salvage yard the next day for the far under blue book value price of just $128.40!

The location where Ryan’s remains were discovered also happened to become strong circumstantial evidence used against the Rempel brothers.

The burn barrel was located not far from a neighborhood where the brothers had both lived. Even more incriminating was the fact that both men had also worked at one time at the barrel’s exact location!

Perhaps the evidence that contributed most to the legal demise of the three defendants were the details of the crime they sent each other via text messages. Maybe they thought they would never be suspects in any crime if Ryan’s body was never found, or possibly they did not think their messages were saved, but the text messages were most damning because they essentially outlined the anatomy and chronology of the murder.

A 2011 series of texts between Cuthill and her husband, just after the courts awarded visitation rights to Lane, clearly implicate the mother in the conspiracy.

“Can I trust Will to have this done without the cops showing up on my doorstep?” Cuthill asked Tim Rempel.

In another message, Cuthill tried to allay Tim Rempel’s fears of getting caught.

“You won’t have any part in his mister ur gonna behanve n let ur brother deal with it,” she texted like a teenager. “I mean it Tim my answer will be no right now I won’t even consider it if you have any part of it.”

Within a couple of months Tim Rempel’s trepidation passed as a text he sent to his wife just two days before Ryan’s abduction demonstrates.

“Getting things ready scoured the best spot at the pit.”

To add to the incriminating text messages, the police secretly recorded phone conversations between the two brothers. Tim and Will apparently suspected that the police may be on to them because they spoke in a code during their recorded conversations. Many amateur criminals believe that using code words during a phone conversation will impede a police investigation and make prosecution difficult or impossible, but even professional criminals have been sunk by carefully coded phone conversations. One of the major pieces of evidence used against mafia kingpin John Gotti during his trial was a series of phone calls where the dialogue was spoken in code. Experts were able to quickly crack the code, which helped send Gotti to prison for the rest of his life.

But Tim and Will Rempel were no John Gottis!

The code the two brothers used was easily cracked by the Calgary police. One particularly damning conversation clearly had to do with the site where Ryan Lane’s body was burned.

“They found the kitchen,” Will told Tim after the police discovered Ryan’s charred remains. “But as hot as it was, there was no DNA.”

The mountain of evidence led the jury to quickly convict all three defendants of first degree murder on April 20, 2016. Even Sheena Cuthill, who testified against her cohorts, could not escape the fate she created for herself. The three killers were given life sentences and will not be eligible for parole for twenty-five years.

Check out True Crime Stories Vol.3 and see more chilling cases like this. 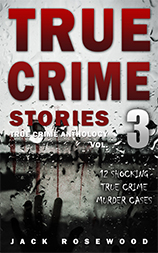